Over the last six months I have been involved with a project called Communion. Communion is a collaboration between St Barnabas Broadway and Christ Church St Ives. The project involved a worship night, held at St Barnabas in October of 2015. The night was recorded with the intention of releasing a Live Album. Most of the songs sung on the night, and all of the songs for release on the album, are new songs written by members of the two churches. Communion aims to support Christian songwriters, give a platform for new music and to inspire churches and church musicians in their stewardship of music ministry.

This week, after many months of work, we are releasing the Live Album. You can download it at Mountain Street Media or iTunes, or find it on Spotify. Needless to say, we are very proud of the result and believe that many churches can benefit from the songs appearing on the album.

The Communion project is run by a team of people from both St Barnabas and Christ Church. For 2015, Curtis Smith (Barneys) essentially ran the team, co-ordinated the event and was the band leader for the St Barnabas Band. Andrew Judd (Barneys) assisted with co-ordinating the event and a few other administrative matters. Evan Brown and Matt Van Geldersman (Christ Church) ran the Christ Church band, and I helped out with the technical side of things.

The budget for Communion in 2015 was relatively small. We had some capital left over from the previous year, and a decent idea of what we could expect from ticket sales. We decided to keep the ticket price small in order to ensure everybody could come along to the event. With a small budget the challenge was to deliver both a great experience on the night, and a quality recorded product. We used a lot of the in house AV equipment at St Barnabas, borrowed a number of microphones, and hired the rest of the audio equipment. We were generously and ably supported by Paul Walton of Fusion Entertainment in the supply and operation of a lot of his lighting equipment.

The first thing we needed to think about from a technical side of things was what equipment we were going to need to achieve what we wanted to achieve. Our experience from the 2014 event allowed us to make a few broad decisions which affected our equipment choices.

In 2014, Paul Walton generously provided his services and equipment. As expected, Paul did an amazing job, so it was a no brainer for us to ask for his assistance again.

For 2015 we decided to invest in a professional director to co-ordinate the camera volunteers. Tom Judd of Shark Eats Bear was just the man we were after. Tom was able to ensure we had a singular vision for what we were trying to achieve with the video’s. This meant Tom had a few ‘safety’ camera shots at various points around the church, as well as mobile camera operators shooting the night.

We wanted to see if we could step up the audio quality on the album for 2015. The previous year we had connected the in house audio console (Roland M480) to a borrowed computer that had the required interface equipment. This worked ok, but wasn’t ideal. It wasn’t the most reliable setup, with a number of things that could go wrong. Additionally, I wasn’t particularly impressed with the sonic quality of the preamps and converters in the Roland system. Additionally, the program we had to use (due to limitations for the Roland system) wasn’t particularly wonderful. In order to simplify the setup and overcome these issues I wanted to move to a Dante system. This would allow us to connect via the ethernet port of any computer and use whatever program we wanted for recording purposes. 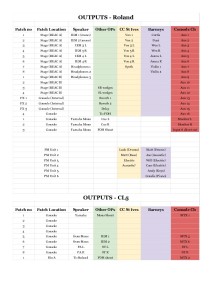 In 2014, we had a few issues with foldback. In particular, a number of vocalists struggled to hear themselves properly, which affects how well they can pitch and thus affects their performance. Unfortunately, having lots of speakers on stage increases stage noise and spill into microphones, reducing the quality of both the live sound and the recording. We therefore decided to use in ear monitors/headphones for all the musicians, with only a couple of speakers on stage providing a little bit of low level fill. This also would help tame the challenging space that is St Barnabas. We also decided to have a dedicated ‘monitors’ console to handle the foldback for the musicians. We used the in house Roland M480 console as the monitors console, as we were able to use the in house Personal Monitoring system with this console. See left for a version of the output patch sheet for the night (click for a larger image).

In order to allow for recording with Dante, and to facilitate using 2 mixing consoles, we hired a Yamaha CL5 and Rio rack for the event. Using this console and input rack, we were able to network the input rack, console and 2 record computers together to distribute audio across all devices. This was super simple using Dante Controller and Dante Virtual Soundcard. We also hired a split system, allowing us to split the microphone signals to both the ‘monitors’ console (Roland M480) and the ‘FOH’ console (Yamaha CL5). 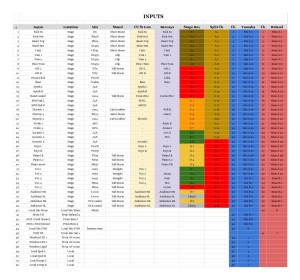 The Live Event involved two different bands with two different sets of needs playing. We had to cater for all the musicians from both bands, ensure we were able to recall all the settings required for the different bands during the event, and provide the best sound quality possible for the recording. So, we put a fair amount of thought into what microphones we would use for which instruments and how many channels we needed for the night. See right for a version of the input patch sheet for the night (click for a larger image).

After all the planning (pre-production) was finished, it was a relatively simple process to setup (bump in) the equipment and be ready for rehearsals and sound checks. There was little need to make changes to the plan, and we did not encounter any issues with equipment as we had thought through the whole process from start to finish.

Once sound checks had been conducted and rehearsals begun, we were able to hook up the recording computers and test the setup. It worked like a charm! We ended up using two computers, one running audacity and the other running Pro Tools. This ensured we had as much redundancy in the recording process as possible.

The end result of all this planning and set up was a very successful night. We had around 300 people attend, which was great to see. The new songs that were showcased got a great response from the attendees and everyone was able to belt out a few old classics. It was a wonderful opportunity to get together as a unified church and praise God together.

I was very happy with the sound on the night. We were able to pull together a great mix despite the large bands and challenging space. The recording went smoothly and straight away sounded a lot better than the recordings from the previous year. But for more on that, you will need to wait for Part 2.