The 21st Century has well and truly arrived, and with it comes technology only previously seen in science fiction. We still have not seen artificial intelligence of the ilk of The Jetsons and 2001: A Space Odyssey, but surely these are not too far away. Many of the tasks that took up our time in the past have been replaced by much less time consuming technological processes. Soon many jobs will be threatened by technological advancements. So what does this mean for ministry staff? Are our pastors going to be replaced by Robo-Pastors?

Recently the Committee for Economic Development of Australia (CEDA) released a report on the future of the Australian workforce [1]. Their findings suggested that a whopping 40% of jobs could be replaced by technology by 2025. If you have seen this reported in the media you may have noticed that clergy were included on the list of jobs that may be replaced!

“What we’ve found is that going right through to dentists, and clergy and chemical engineers — and, dare I say, even editors or newspaper proprietors and, heaven forbid, even economists — all of these are in grave danger of perhaps outliving their usefulness,” Professor Martin said.[2]

This dire prediction was surprising to me, so I had a bit of a read of the report and found this comment to be quite misleading. The report in fact indicates that clergy have a 0.81% probability of job computerisation by 2029, as opposed to telemarketers at 99% probability (and economists at 43%). [3].

However, I think this report, and particularly the media coverage surrounding it, does tap into our fears about what the future looks like. We rightly see that technology will advance and allow for the automation of tasks, and predict therefore that jobs will be lost as we are overtaken by computers. However there is a flaw in this reasoning, which I think can be explained in thinking through the economics of the situation.

Let’s assume 10 people work in a particular profession with a productivity output of 100% (i.e. the maximum amount of work they can achieve is 100%). If technology enables automation of 20% of the tasks they need to do, 100% of the productivity can be achieved with 80% of the workforce, resulting in 20% of people losing their jobs (2 people in this case). This is the assumption it seems we have, and why we may be afraid of what the future holds.

But another conclusion is also possible. Taking the same assumptions from above, the 20% efficiency gain of automating tasks can allow for 20% more time to be spent increasing output, instead of just being removed entirely. That is, the 10 people still have their jobs and the productivity output is now 120% of what they could achieve before.

Now the reality of this situation is much more complicated (the second idea requires re-skilling the workforce) and there are many factors at play. However, my point is that technology advances are a significant driver of increasing productivity in every part of the economy, and this includes the clergy. While ministers are not at significant risk of losing their jobs due to technology (if the 0.81% figure is anything to go by), they can still make use of technology in order to increase their ministry. 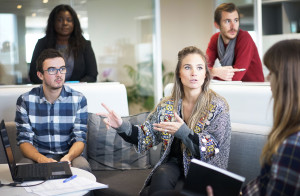 Take our example above where 20% of tasks are eliminated due to technological automation. In a 5 day week this equates to 1 full day of work. If you are a minister and you are told you could have another day of work, imagine what benefit that could have to your ministry. A technologically assisted Pastor (or Robo-Pastor) could spend more time with people, more time writing a sermon or more time planning the future of the church. And if your mind immediately goes to thinking you could spend more time catching up on admin, well it just so happens that those tasks are typically what we are talking about eliminating in the first place!

And the good news is that I don’t think 20% is too far out of the question. There are a vast array of options to increase efficiency and productivity for church staff. I will be outlining some ideas I have in part 2 of this article.

I think we need to make way for the Robo-Pastor and the technologically assisted ministry staff team. In becoming more efficient and more enabled workers, ministry staff can increase their investment in people and spend more time bringing about the Kingdom of God.